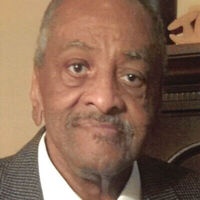 Andrew ”June” Henry, Jr., age 83, entered into eternal rest on Friday, February 4, 2022. He was a native of New Orleans, LA and a resident of Harvey, LA. June, as he was affectionally known to family and friends, was a 1955 graduate of Lincoln High School and was a retired brick mason. He was a former employee of Witco Chemicals. Andrew served his country as a member of the United States Air Force. He was a member of member of Westwego Church of God in Christ. Loving father of Richard Henry, Michael Nero, Kevin (Amanda) Royall. Eric Jefferson, Alecia Moten, Marcia Thomas, Kimberly Johnson, and the late Marcus Royall. Son of the late Andrew Henry, Sr. and Bessie Mae Tyson Henry. Grandson of the late Ida and Damon Tyson, Richard Henry, Sr., and Rebecca Chisolm Henry. Brother of Ferdinand, Clarence, and Gwendolyn Henry, Laura Smith, Barbara White, Carolyn (Greg) Williams, and the late Alvin Henry, Sr., Yvonne Mack, and Ida McCoy. Brother-in-law of Glen Henry and the late James Mack and James McCoy. Andrew is also survived by 22 grandchildren, 14 great grandchildren, 5 great great grandchildren, and a host of nieces, nephews, cousins, other relatives, and friends. The family would like to express special thanks to all the doctors and nurses at the New Orleans V. A. Medical Center for all the care given to Andrew. Relatives and friends of the family, also pastors, officers, and members of Westwego Church of God in Christ and all neighboring churches are invited to attend the Funeral Service at Davis Mortuary Service, 230 Monroe St. Gretna, LA on Saturday, February 12, 2022, at 10:00a.m. Visitation will begin at 8:30a.m until service time. Interment: Woodlawn Park Memorial Cemetery-Westwego, LA To view and sign the guestbook, please go to www.davismortuaryservice.com.

DUE TO COVID-19 PANDEMIC ATTENDANCE WILL BE LIMITED. IT IS MANDATORY EVERYONE ENTERING THE MORTUARY WEAR A FACE MASK OR SOME TYPE OF FACE COVERING.

To order memorial trees or send flowers to the family in memory of ANDREW HENRY, JR, please visit our flower store.